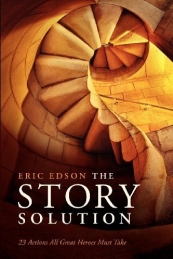 Since I started writing fiction in 2011, I have always been fascinated with the subject of story structure. I have read most of  the key texts written by the screenwriting masters like Syd Field, John Truby, Michael Hauge, Robert McKee, Christopher Vogler, and some of Frank Daniel’s followers,  as well as many more less known writers. It seemed that these screenwriting gurus  had a good grasp of story that any budding fiction writer could learn from.

In my Blogs, I have covered many of their core ideas: the three act structure and its many variants, the sequence method and its variants and the mythical hero’s journey. It seemed to me that story narrative can be broken down into distinct scene, sequence and act components, and that while some of these gurus choose to label their components and turning points differently, their ideas have more in common with each other than they might choose to admit. So when I came across an article written by Eric Edson that asserted all successful movies have between 20 to 23 distinct sections called ‘hero goal sequences‘ I was somewhat sceptical. But as I am a fan of the sequence approach, it piqued my interest enough to purchase his book. I am pleased I did, but after two readings I am still think some of his claims are hyperbole. But it is an excellent book nonetheless.

Firstly, the book is not just about these hero goal sequences. The first 150 pages are about the basics of storytelling: the foundations, creating characters, and building story structure and character growth. Nothing new here — the structure section follows a classic three-act structure. However, Edson is a masterful teacher in the way he explains things in a simple way. You can glimpse his teaching technique and an insight into his approach by visiting his Chanel on YouTube: ‘The Story Solution’.

So what are hero goal sequences and how are they different from Frank Daniel’s sequences?

A Hero Goal Sequence consists of three to seven pages of screenplay — usually two to four scenes — wherein the Hero pursues one short-term physical goal as a step towards achieving ultimate victory in the story. Then the Hero discovers some form of new information I call Fresh News that brings the current goal to an end and presents a new short-term physical goal — thereby launching the next Hero Goal Sequence.

What about scenes or sequences in which the hero is not present – should they be counted in the 21-23 sequences?  Answer – no, they are ignored by Edson. Although they may cut into the time allotted to the hero sequences.

The sequence approach as developed by FranK Daniels is quite different. It is described in David Howard’s book “The Tools for screen writing”  as:

…a self-contained portion of the overall story with its own tension, its own beginning, middle and end.

These are essentially stories within stories. Under Frank Daniel’s methodology a lot of focus is placed on ‘tension’ – the audience’s hopes and fears that the hero will achieve his goal.  The sequence ends when the tension of the sequence ends, even though the same event might lead to a new tension in a new sequence. For example, our hero maybe be searching for a map for the holy grail. The sequence ends when he finds it. But a new sequence and tension begins over whether the hero will find his way to the grail.

Although the definitions look similar the application seems very different. Frank Daniel’s approach normally leads to screen plays with 7-8 sequences for most movies with possibly 12 sequences in a very long movie such a Lawrence of Arabia. Edson’s approach breaks the units down into much smaller units  with 21-23 sequences.

So how does it work? Edson gives a detailed breakdown of Back to the Future. Taking the first Act he lists first six sequences:

Edson’s explanation seems to work, but it is a bit contrived. The goals he identifies are not really ‘steps towards achieving ultimate victory‘ since until the end of the first Act Marty doesn’t even know that his ultimate goal will be to get back to the future. In my view,  the first three of Edson’s sequences  are just a collection of scenes that give a glimpse of Marty’s normal daily life and in some cases are setting up payoffs for later in the movie (for example when Marty later discovers rock and roll).  This initial sequence is what other gurus have described as the setup sequence.  Similarly, Edson’s sequences 4-6 are really just one continuous action sequence leading to the first  turning point (act one beak). So in my view there are only two sequences in Act One – not six.

Does it matter what we describe a unit of narrative as a sequence or scene or some other element? Probably not. It’s up to the writer to use what techniques they find most helpful and I can see real benefits in determining what the hero’s goal is in any situation whether it be a scene, a sequence, or the story as a whole. One famous writer once said the main character should always have a goal in every scene even if it’s just to drink a glass of water. Without a goal there is nothing to move a story forward.

So what do you find is the most helpful methodology for visualising the structure of your story?