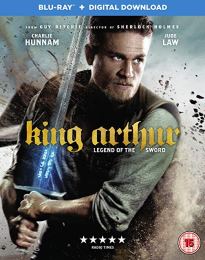 Recently I was looking through my blue-ray collection to find a movie to watch with my family. King Arthur: Legend of the sword (2017) caught my eye. The movie directed by Guy Richie, grossed $148m on a budget of $175m, which was pretty much a financial disaster for the producers, and the critics complained it ignored Arhurian legend. But I thought it was still enjoyable. I remembered a comment my son made the first time we first watched it. He said, “You know it’s just a grown-up version of the Lion King plot.”
He was right, of course. The movie, King Arthur, doesn’t follow the normal Arthurian legend. And it’s plot line is almost identical to the Lion King. The king’s brother kills the king to steal the thrown, while the prince runs away to live another day. And when the prince is found, he doesn’t want to be king. That’s pretty much the Lion King plot. Yes, there’s the bit of Arthurian trope thrown in about Excalibur, magic and mages. But strip the story down to the core and you’ll find the Lion King.
But then again the story of an uncle killing his brother to take the crown isn’t new. It’s at least as old as Shakespeare’s ‘Hamlet’. Yes, I know Hamlet had a very different ending because it was a tragedy. But the story premise that sets the story in motion is pretty much the same as the Lion King.
Should we be surprised that these story lines repeat? Probably not. Chris Booker, for example, suggests that all stories are based on just seven basic plot structures. Others have suggested a number up to 33 plots. But that is still a relatively small number of plots.
Take the plot pattern of typical romance story. Boy meets girl, boy and girl fall in love, boy loses girl and then finally wins her heart. It’s a simple formula. Yet the publishing industry produces millions of romance novels each year using it. The plot is the same, but to the readers the stories feel very different.
The point is readers don’t fall in love with a plot. They fall in love with characters and the emotional content of the story. Plot can provide tension and excitement and a reason to care for the plight of our characters. But plot alone is not story. Story is about emotion and what the reader or audience feels. It’s a form of chemistry between the characters and what happens to them that draws an emotional response from us.
Does that mean that plot is unimportant? No, of course not. If nothing happened to our characters, why would we feel any concern for them? We want to see them challenged. We want to see them win against the odds, achieve what they desire, or feel sorry for them if they fail or give up their goal. It’s human nature to empathise with other humans. And our characters, while fictional, are all too human.
But what about the darker stories? Do we empathise with Michael Corleone in the Godfather Part II? Was Michael Corleone evil, or was he only doing what he had to do to survive in a mafia world and protect his own family? In an amoral world were his actions at least understandable and relatable?
And what about those even darker characters from the Horror or Dark Fantasy genre. Why are we so fascinated by them? Does it arouse out curiosity or excite some deep primal need within us? Maybe these stories are a kind of escape valve that allows us to release our own darker emotions. As children we all played out stories of our favourite characters from TV, movies and books. Maybe as adults we’re not that different. We still need the same emotional release and we find it by becoming absorbed in a character of a novel or movie.
When choosing a novel to read I often read the reviews on Amazon or Goodreads. One of the harshest comments a writer can be given is when a reader says they couldn’t connect with the main character. They could have said ‘like’ or ’empathise’ but they use the word ‘connect’.
Connection is what a story is all about, and the craft of the writer is all about making it happen.