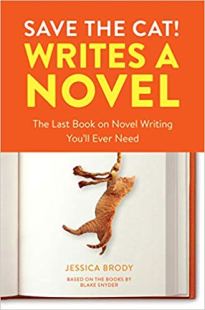 One of the first books I read on screenwriting was the late Blake Synder’s Save the Cat. I liked it so much I also bought and read Save the Cat! Goes to the Movies and Save the Cat Strikes Back, both of which are great books on story and genre structure. I therefore wondered what more I could possibly learn that’s new from Jessica Brody’s Save the Cat Writes a Novel.

The answer is that it covers almost all the material from the original three books in a comprehensive manner but is clearly focused on novel writers rather than screenwriters. So if you are a novelist and you haven’t got the original three books then this is good choice. It is also well written and explained, possibly even better than the original books. For those of you that have not encountered the Blake Snyder’s beat sheet before, seeing it for the first time may come as a bit of a shock since it gives approximate timings of 15 key story beats that are evident in most great stories. These timings should not be taken too seriously as novels are much more flexible than screen plays and therefore should be regarded as a broad guide. These timings have been adjusted by Jessica Brody from screenplay timings in minutes to approximate percentages of a novel.

At the Mid Point the hero usually experiences a false victory or false defeat, the stakes rise (new revelation, twist or ticking clock) and the A & B stories intersect.

After the Mid Point, generally it is down hill for the hero as the Bad Guys Close In, culminating in an All is Lost moment.

The Debate sequence and Dark Night of the Soul are multiple scene sequences where the hero reflects and reacts to the story Catalyst (the event that sets the main story in motion for the hero) and the All is Lost moment (the hero’s lowest point).

The red beats are what Jessica Brody refers to as ‘foundation beats’ — the important beats that hold the story structure together.  These are not necessarily unique to Blake Synder’s beat sheet as they appear in other three-act structures.  Jessica Brody suggests that when designing the story from scratch these ones are best determined first ahead of the rest.

At the heart of the Save the Cat approach is the believe that stories are about a flawed sympathetic  hero/heroine that through his/her journey goes through a transformation. Thus the Opening Image and Setup show our flawed sympathetic hero/heroine in his/her initial state.   And the final image shows how he/she has transformed. This transformation is linked to the theme of the story, often articulated by a character in beat 2 and rejected by the hero/heroine. Through the course of the story the hero transforms recognising his own weakness at the Mid Point, and later transforms during the reflective moments of Dark Night of the Soul, and the Finale. An important element of the hero/heroine’s transformation will be the influence of the B Story characters introduced at the beginning of the second act. These can be the hero’s love interest, side kick or mentor who help him to find his/her true self.

The idea that a story should be about a flawed sympathetic hero undergoing a transformation as a result of the story is not unique to the Save the Cat approach. Michael Hague and Christopher Vogler both talk about the outer and inner journey of the hero in some detail. And they are not the only ones that identify what some prefer to call character arc. Most successful stories are about heros that change. Take Star Wars, New Hope where Luke Skywalker transforms from a feeble farm boy to hero. Alternatively they can be about steadfastness of a hero under enormous pressure – Indiana Jones, for example, rarely changes. In either case there is usually an underlying theme to the story that is expressed through the character’s actions and resolve.

For those reading about the beat sheet for the first time the approach might seem somewhat formulaic. It doesn’t have to be. If you manage to have more major twists and turns than the beat sheet suggests then it shouldn’t be a problem. No one is saying that these are the only beats you need to be concerned with. The Fun & Games multiple scenes, in particular, require high tension actions sequences with twists and turns and highs and lows. Without them your story is going to be flat.  And when the Bad Guys Close In there should be plenty of opportunity to make the hero’s life pure hell. But if you are missing  any of the big foundation beats or they have turned out flat then you may find your story is in trouble.

It’s easy to try to dismiss the save the cat approach as just another formulaic plot structure and I suspect many have. But they are probably missing the point. It’s not about following a mechanical list of plot points. It’s all about weaving together the A (main story line) and B (main character arc) stories in such away as the theme emerges through the hero’s character transformation. The plot points are just the milestones along the way.