Everyone knows first drafts of a novel are always c**p. But how do you fix them?

Unless you’re Stephen King, the first draft will require more than just a little line editing and proof reading before it can be published. So before you polish a draft you need to ensure that the story is working and that it is the best it can be.

I noticed that Larry Brooks had brought out his book, Story Fix.  As a fan of his earlier publications, Story Engineering and Story Physics I had to buy it and wasn’t disappointed. It’s written in the same style as his earlier books and at times can be brutally honest. In a nutshell, at the heart of any great novel is a concept and a premise, and if you can’t get these right or you meander away from them during the story then the story will bomb. Of course, there’s a lot more to the book than that. You will need to read it to fully understand  how to apply this approach properly.  I believe every writer can get something from this book, even if they don’t totally agree with his views. 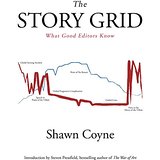 Another different approach to story analysis is Shawn Coyne’s The Story Grid. This comprises a foolscap one page global summary of the key elements of story giving a helicopter view of the story, and a 14 column detailed analysis of each scene, which is used to produce a grid. The book is written from the perspective of an editor with 25+ years experience to help writers become more successful editing their own material. Coyne demonstrates the approach by analysing The silence of the Lambs by Thomas Harris and creates a scene by scene graph illustrated on the cover of the book. The book is also supported by five videos supported from Coyne’s website.  Even if you’re  not into using spreadsheets to analyse your scenes in this way or into this level of detail there’s still lots to take from this book. You can always  adapt or simplify the technique to track those scene elements you find most important.

Yeah-that’s not very clear.  But Horowitz explains that a series can be a person, object,  place, relationship, or a phrase, which varies in the text through a number of iterations to eventually answer a story question.  For example he identifies a series in Harry Potter  with the question “is Snape fighting for the good guys or the bad guys”.  Every scene that is relevant is identified by its scene number and title to give a grid for that series. So Horowitz is identifying the common threads and story arcs by scene. Horowitz may not use the term plot, but he does identify a central series, which is about the story goal and what’s at stake.

If you are interested in the story process, each of these books can help you gain a different perspective in analysing your own story. You don’t have to use or accept all the ideas. Just adapt them to your own needs. That’s what I intend to do.