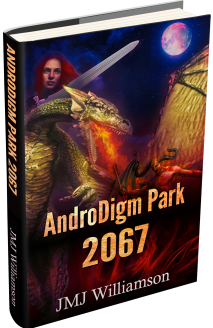 It’s a great feeling to publish a new novel — somewhere between nirvana and just plain relief that it’s finally out. AndroDigm Park 2067 is a project I started over two years ago. The title changed from that original title several times, but the story remains the same.

So let me explain the strange title. AndroDigm in my book is the name of the largest global cyber corporation. Its name is a fusion of the words ‘Android’ and ‘Paradigm’. There are many ways to define a paradigm, but the one I like is: “a set of assumptions, concepts, values, and practices that constitute a way of viewing reality for the community that shares them, especially in the intellectual disciplines.” (The Free Dictionary by Forlex).

So the AndroDigm  corporation is all about changing the way society views and accepts android technology and, of course, making money.

AndroDigm Park 2067 is a work of fiction, but any writer writing about the future is entitled to make some assumptions as to where technology may possibly take us. Even in today’s technology human-looking androids have been developed that can mimic human behaviour and  artificial intelligence systems can easily outperform human analysis. A world where intelligent Androids are economically viable as replacements for human workers is not unthinkable.

How do you think human’s will react? In the early 19th Century, Luddite workers destroyed machinery in the cotton and woollen mills of England because they thought the machinery threatened their jobs. Might we find a similar reaction by humans in the 21st Century? The catalyst for my story is the murder of the AndroDigm CEO at a violent Action Against Androids demonstration and the story is all  about the investigation that follows.

Another aspect of this future world is the domination of the cyber and media companies and the growing number of super rich.  If technology can create intelligent human-looking androids, then perhaps it can also create a paradise park for the super rich to play where any fantasy creature is possible, including dragons.

Why 2067 in the title? Well it’s exactly a hundred years since the ‘Summer of Love’ (1967) when a hundred thousand hippies descended on San Francisco  professing love and peace.  Why wouldn’t any self-respecting government and the large corporate businesses not want to take advantage of the feel-good factor from such centenary celebrations?

So there you have the title and a snapshot of the story world for the novel. But stories are about people and you’ll find that the characters in the story are just like you and me with their own faults and prejudices. Technology might change but human behaviour will always remain the same. I could tell you a lot more about my characters and their story. But that would spoil your enjoyment. AndroDigm Park 2067 is now available at Amazon in both print and kindle formats and at other retailers in print format.